THE FRENCH HAD A NAME FOR IT 6

DARKNESS IN THE SIXTIES

FRI, NOV 15
The Quicksand of Seduction

ON N'ENTERRE PAS LE DIMANCHE
ONE DOES NOT BURY SUNDAY

LA GUERRE EST FINIE
THE WAR IS OVER

THURSDAY, NOV 14, 2019EVEN PARANOIDS HAVE ENEMIES

An early hint of the sixties pervades this stylish "B-noir" that combines slick camerawork and offbeat, rhythmic editing to enliven a tale of infidelity (ho-hum!), jealousy (yawn!) and murder (applause here!). Lead actors Annie Girardot (surprisingly sensual) and François Perier (alarmingly volatile) set up the audience for a Hitchcockian twist that turns the tale on a delirious ninety-degree angle! First-time director Dudrumet was never better thanks to his stars, his cameraman and his editor (Janine Verneau, who'd do the same for Agnes Varda in Cleo a 5 et 7 two years later).

Visualize a sumptuous estate with an ancient curse—and an elderly owner with grasping relations who want him out of the way just as soon as humanly possible. Mix in scheming employees and a scholar interested in ancient witchcraft (the genesis of that "curse"...) and you've got the recipe for a most unusual "old dark house" tale done sixties style—and who else but crafty, cranky, masterful Julien Duvivier to give you the creeps? Are there really murderers who can walk through walls? Duvivier warms up for his astringent noir masterpiece Chair de poule with this sprawling noir-horror hybrid made to keep you guessing…and guessing! 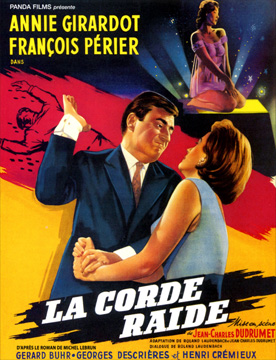 ► TICKETS for DOUBLE FEATURE starting at 7:15